We explore the variety and biodiversity of the National Parks of Madhya Pradesh in India’s most beautiful National Parks, on this Indian Wildlife Safari Group Tour. We will visit highland habitats, teak forests, bamboo and grasslands areas as well as riverland areas.

We will go on a traditional Indian Wildlife Safari to seek out the big cats—tigers and leopards—as well as monkeys, crocodiles and a huge number of bird species. You will delight in discovering things you have never experienced before.

And let’s not forget about Visiting the Magnificent Taj Mahal. While staying in Boutique & Luxury lodges / tented camps along the way. “India is a land of extreme contrasts, culturally and biologically. The people were always friendly, ever ready to advise and help us have a really great experience. The wildlife was just fantastic so we were able to get some really fabulous photographs of animal behaviour. It was a great trip”. Keith from Newcastle

Our journey starts in Delhi, India’s capital and largest city where we soak up the culture, history, and artistic life of Delhi, one of the world’s greatest cities.

Before we start our Indian Wildlife Safari, we will visit the important, Paleolithic Bhimbetka Rock shelters with rock art dating back 30,000 years, the earliest trace of human culture in India. Madhya Pradesh has some of India’s most important and significant national parks and reserves for Tiger Safaris in India.

Satpura National Park is 1400 square kilometres of highland habitat for some of India’s most important wildlife.

Pench Tiger Reserve consists of over 700 square kilometres—primarily of teak forest—and is considered one of India’s finest tiger reserves.

Kanha National Park is one of the largest national parks in India and extends over almost 2000 square kilometres of undulating country.

Bandhavgarh National Park, amidst the Vindhyanchal Ranges, covers about 440 square kilometres and contains a mixture of grassland, bamboo and densely wooded hills.

On the Wild Heart of India – Indian Wildlife Safari Group tour, game drives provide the best opportunities for all types of wildlife viewing and for having a chance encounter with a big cat. We explore, mostly by jeep, looking for some of India’s most exciting wildlife including: tigers, leopards, sloth bears, wild boars, rhesus monkeys, langurs, hyenas, wild dogs, pangolins, marsh crocodiles, and many species of bird. 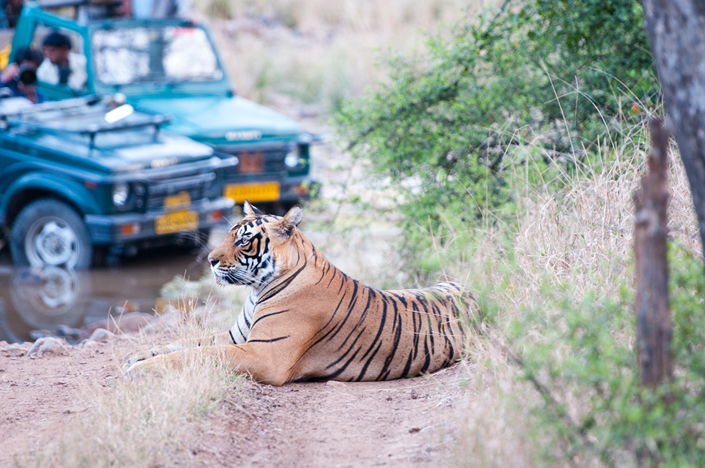 From the national parks we head back to Delhi, and then we will visit the Taj Mahal, Agra by train, ending back at Delhi Airport for your onward journey home.

Your host will be Australian Professional Photographer, Michael Snedic.

Michael’s images have been published across Australia and the world, in hundreds of publications. He has also written many dozens of magazine articles on nature/photography since 2001, including Australian Geographic, Wildlife Australia, Birdlife Australia, the UK’s BBC Wildlife and Australian Photography +Digital (Australia’s largest-selling photography magazine) which he has been a feature writer for since 2006.  Michael is honoured to be an Australian Ambassador for Lowepro, Lenscoat as well as The Nature Conservancy Australia’s Photo Competition 2015.

As one of Australia’s most experienced photography tutors, Michael presents photo workshops and tours across Australia and the world has done so for the past 14 years. Locations visited, or about to be visited, include Africa, Antarctica, the Arctic, the Subantarctic, Russian Far East, Galapagos Islands, Peru/Amazon and more.  He is thrilled to have joined the team at Mantra Wild Adventures and looks forward to showing guests how to get the best possible shots of both the wildlife and landscapes, as well as the culture, of amazing India on this Indian Wildlife Safari Group Tour!

Arrive Delhi by International flight. After crossing immigration and baggage, you will be met by an Inspiration India/ Mantra Wild representative at the arrivals hall, who will transfer you to your hotel (rooms are available from 12 noon).

DELHI reflects the legacy and heritage of Mughal Delhi, which is now known as Old Delhi. Pulsing with energy and colour, Old Delhi is laced by a maze of narrow lanes where you get a glimpse of the many flavours from the wedding bazaar to spice markets to graceful architecture. In contrast to Old Delhi the imperial city or New Delhi, created by the British, has numerous fine colonial structures, magnificent buildings and wide boulevards laid according to the master plans of the great colonial architect Lutyens.

Overnight at The Claridges (Deluxe room)

You will be collected at 5:30am from the lobby and transferred to New Delhi railway station in time to board the Bhopal Shatabdi Express, departing Delhi at 0600 hours, arriving Bhopal at 1430 hours.

Madhya Pradesh State is the little visited heartland of India, where some of the subcontinent’s most spectacular artistic treasures are hidden among a traditional rural landscape.

Assistance upon arrival and drive to Satpura (180 Kms; 4 hrs), enroute, stop at the Bhimbetka Rock shelters, an archaeological site of the Paleolithic era, exhibiting the earliest traces of human life on the Indian subcontinent. Some of the Stone Age rock paintings found among the Bhimbetka rock shelters are approximately 30,000 years old.

On arrival in you are assisted with checking in to your lodge.

Satpura National Park is cradled in the Satpura Range (Mahadeo Hills) and straddles the State of Madhya Pradesh. With the adjoining Bori & Panchmarhi Sanctuaries, Satpura N.P. provides 1427 sq. kms of unique Central Indian Highland ecosystem cover to India’s wild denizens. Satpura N.P.(set up  in 1981 and 524 sq. km) is beautiful and unspoiled. It represents nature at its very best. The fascinating deep valleys, high mountains, rivulets, waterfalls and Tawa’s vast reservoir combine to give this Park an unique beauty. The terrain is extremely rugged and consists of sandstone peaks, narrow gorges, ravines and dense forests. The altitude ranges from 300 Mts. to 1352 Mts. From the 4500 feet Dhoopgarh peak to the almost level plains of Churna the ride is only 60 kms but it takes about 5 hours to travel from the cool environs of Panchmarhi resort to the edge of the Tawa reservoir.

Satpura & Bori abound in Central Province wildlife. The bio-diversity is stunning with over 1300 species of plants, which include numerous rare bryophytes and pteridophytes. While Sal & Teak forests are abundant, Central India mixed deciduous forests cover a major part of the area. An evident eyesore is the rampant and unchecked growth of Lantana. The meadows and valleys have been completely taken over by this invader.

Enjoy morning & afternoon safaris by Jeep in the national park.

Enjoy morning & afternoon safaris by Jeep in the national park.

Early morning start for Pench. We recommend an early start at 0600 hours and arrive Pench in time for lunch.

This will be a long day. The rest of the day at leisure.

Pench Tiger Reserve is India’s 19th Project Tiger Reserve. It is considered to be one of the country’s finest new tiger reserves spread over 700 square kilometres and consisting primarily of teak forest. The population of game is also very high – it has a very high density of prey ( Spotted Deer, Wild Boar, Sambar, Blue Bull and the Indian Bison) and is also home to a very healthy population of Tiger, Leopard, Wild Dog and Jackal amongst other smaller predators. The bird list has over 280 species.

Morning and evening  jeep safari drive into the park. Game drives provide the best opportunity for all types of wildlife viewing, from bird and butterfly watching, to sighting the major prey species and chancing an encounter with a big cat. The drives would incorporate different regions of the park, showcasing its huge bio-diversity. The major mammals include gaur, dhole, barasingha, sambar, chital, muntjac, leopard and tiger. Afternoon drives are predominantly experienced in the Mukki region, often parked quietly aside water holes, waiting and watching for the late evening activity.

Morning and evening  jeep safari drive into the park. Game drives provide the best opportunity for all types of wildlife viewing, from bird and butterfly watching, to sighting the major prey species and chancing an encounter with a big cat. The drives would incorporate different regions of the park, showcasing its huge bio-diversity. The major mammals include gaur, dhole, barasingha, sambar, chital, muntjac, leopard and tiger. Afternoon drives are predominantly experienced in the Mukki region, often parked quietly aside water holes, waiting and watching for the late evening activity.

Set amidst the Vindhyanchal ranges, the park covers an area of 437 sq. km. and has a series of  ridges running through it. About half the park is covered with fine stands of Sal while mixed forests are found in the higher reaches of the hills. Stretches of bamboo and grasslands are found throughout. The main view area is still in the core of the park with its 32 picturesque wooded hills.

During your 3 nights stay in Bandhavgarh, you will enjoy four safaris into the park on jeep. We will also arrange a visit to villages surrounding the park.

On arrival transferred to the airport hotel The Holiday Inn, Aerocity.

After an early breakfast, transfer to Nizamuddin Railway Station to board Gatimaan Express (0810/0950hrs) to Agra.

Arrive Agra and experience the sublimity of the Taj Mahal (the Taj is closed on Fridays) – a varying kaleidoscope of solitude, colour and mood. A tribute from a great emperor to the memory of his beloved wife, it was 22 years in the making (1631-1653) and is a cerebral experience that defies description. Widely regarded as the earthly replica of paradise, the TajMahal is likened to “a vision, a dream, a poem and a wonder”.

Lunch at a local restaurant.

Later, guided visit to the Agra Fort – strategically situated along a bend on the Yamuna River. Built in the 16th century AD by three generations of Mughal emperors, it is a superb synthesis of stern military fortifications with delicate interior details.

Post visit, drive back to Delhi and transfer to airport to board your International flight back to home.

10 Reasons Why You Need to Visit Madhya Pradesh

What do I need to know about India